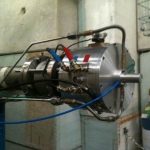 LICORNE is a unique, high-flux, directional neutron source based at the Tandem accelerator of the ALTO facility, operational since June 2013. LICORNE produces intense, kinematically focused, quasi-monoenergetic beams of neutrons between the energies of 0.5 and 4 MeV. The neutron production is achieved using the capability of the ALTO Tandem accelerator to produce intense primary beams of 7Li (13-17 MeV) which results in secondary beams of kinematically focused neutrons in cones with opening angles typically between 10 and 28 degrees when bombarding the hydrogen gas target of the LICORNE converter. This natural directionality has three distinct advantages: 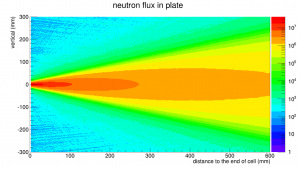 Maximum fluxes achievable are approximately 108 neutrons/second/steradian for continuous beams corresponding to a primary 7Li beam current of around 1μA. LICORNE is developed by researchers at the IPN Orsay, M. Lebois and J.N. Wilson in collaboration with S. Oberstedt at the EC Joint Research Centre Geel in Belgium and A. Oberstedt at Eli-NP. The current LICORNE physics program covers a diverse range of experiments for both fundamental and applied physics, from nuclear reactions and the study of prompt gamma and neutron emission in nuclear fission, to nuclear structure and the production of exotic neutron-rich nuclei.