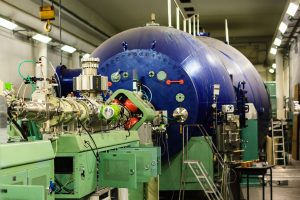 The Tandem accelerator is an electrostatic “Van de Graaf” type particle (ion) accelerator: it uses a very high voltage – up to 14.8 million volts – to accelerate the negative ions supplied by the injector. This very high voltage is generated by a charge transport system called a “laddertron”. The charge is collected at the central terminal, and is distributed along the tube and the column thanks to chains of resistors. In the central terminal, a stripper system transforms negative ions into positive ions, so that they are accelerated a second time in the high energy part of the machine. The Tandem accelerator produces continuous beams. However, a powerful buncher/chopper system between the ion source and the injector allows pulsed beams to be created. The standard pulsation periods are 100, 200 and 400 nanoseconds, with a pulse width of typically 2 nanoseconds. The chopper can remove every nth pulse, where n can vary between 2 and 255, which can extend pulsation periods up to 100 μs.